The reproduction of the genus Microgale in captivity

The establishment in recent years of laboratory colonies of insectivores has concentrated its research on the family Soricidae: Suncus murinus (3; 4); Cryptotis parva (1); Crocidura russula (9); Sorex araneus (2); and sufficient behavioural and reproductive data are now available for extensive comparisons with other taxa. In our laboratories at the National Zoological Park, earlier successes in breeding tenrecoid insectivores were reported for the genera Echinops, Setifer, Tenrec and Hemicentetes (8; 5; 7). A more detailed set of comparisons, including preliminary data for Microgale up to June 1969, has already been published (6), but only in the last three years have we accumulated sufficient information to outline the reproductive patterns of two species of this genus. This paper then completes our analysis of tenrec reproduction begun in 1964.

The Microgale specimens were held (except for the breeding experiments) in a variety of individual cages, with floor areas of approximately 3 m3. The wooden holding cages had pinebark mulch and hyperhumus substrates. Wooden nest boxes, 7.5 x 3 x 3 cm, with removable lids were provided in each cage, while strips of newspaper served as nesting material. The animals were fed a basic meat mixture consisting of raw, ground horsemeat, with powdered milk and Pervinal as a calcium-phosphorus supplement. To this was added a vitamin supplement (Vidaylin) and ground egg yolks. In addition, they received 6-8 mealworms daily and live crickets or earthworms twice a week.

For breeding we used a large cage divided by a centre partition into two compartments. A small sliding door in the partition gave the animals access to one another for controlled encounters. The overall floor dimensions were 48 x 184 cm and the cage temperature was maintained at 23-26°C. More detailed comments on care and maintenance can be found in earlier papers (6; 7).

In order to determine receptivity and gestation, pairs were allowed controlled access and their interactions observed for varying intervals. Although males have been left with females through parturition, the practice is not recommended since the best rearing seems to take place when the female is isolated. The approach of parturition is marked in the female by intensive nest-building behaviour and separate nesting. It should be noted, however, that pairs can live quite compatibly in the same cage for prolonged periods and nest together with little overt antagonism. Pairing tendencies and behaviour at time of mating, including courtship and vocalisations, are outlined in detail for M. dobsoni and M. talazaci in a previous publication (6).

We originally imported M. dobsoni in April 1966 and May 1967. Some of the initial animals were sent to the University of Missouri and our base stock consisted of eight adults (four of each sex). Three matings occurred: one resulted in two aborted foetuses and the others in two litters of three young each. Births took place on 25 May 1968 and 22 February 1969. Only wild-caught adults produced young. The minimum age at conception for both sexes was estimated at 22 months. Longevities for wild-caught adults were rather good; two specimens, subsequently sent to Dr Poduschka in Vienna, achieved ages of five years seven months and five years two months in captivity. Two periods of moult were noted for our adults, one in April-May, the second in October-November. It appears that conception can occur from December to April following the autumnal moult.

Eleven adult M. talazaci were acquired in April 1966 and May 1967 and after acclimatisation individuals showed longevities of nine months to five years ten months. Our oldest specimen must have been at least six years of age at time of death. Although the earliest conception occurred after 15 months, the animal in question was judged to be at least 21 months old. Four litters of 1-3 young were born in captivity. Birth took place in February, April, May and July. This species was bred twice in the second generation and the minimum age at conception for the first second-generation litter was 32 months. The latest conception, for both a male and a female, took place at 44 months. Moults occurred most often in May and again during October and November. In general conceptions tended to follow the autumn moult, in February, April and May, with one exceptional mating in July.

Development of the young

Growth data for the two species is given in Tables 1 and 2. Fig. 1 shows how the shape of the head changes with age. Relative body proportions alter dramatically during the first month of life, especially the length of the snout tip, which is rather blunt until about the third week, whereupon the more characteristic pointed snout becomes pronounced. 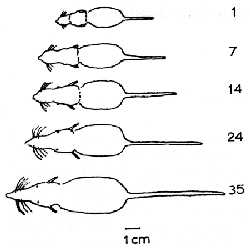 The young of M. dobsoni achieve adult body proportions at roughly two months. Adult weights are attained at 90-110 days. A moult from sub-adult to adult pelage occurs at 110 days. In M. talazaci, adult weights are achieved at 110-120 days and adult body proportions at two months. The eyes of this species open at 18 days (misprinted as eight days in 6: p. 119), while hair growth begins to develop at approximately 12 days; the young are fully haired by 18-22 days. The female carefully retrieves young until they are about 28 days old. From 28-30 days the young begin to follow her during her nocturnal excursions and it is during this period that weaning appears to take place (6: p. 119).

Little field data are available concerning reproduction in this genus. Based on our field studies in 1966 and 1967 it would appear that M. dobsoni breeds during the austral spring and summer; the species occurs on the plateau of eastern Madagascar and is subject to marked seasonal variations in rainfall and temperature. On the other hand, M. talazaci may well breed over a more extended period since it occurs in tropical rain forests exhibiting more uniform climatic features (6).

Although the data are sparse, it appears that talazaci has a smaller litter on average than does dobsoni; however, in both cases the number of young is small and the gestation period long.

We have no evidence to indicate a post-partum oestrus. Although we have not established inter-birth intervals with certainty, the annual population increase is probably very low indeed. The data suggest that the young may not breed during their first year and, furthermore, that reproductive potential extends over a relatively long lifespan for such a small mammal. These are in accordance with our conviction that the annual recruitment in the wild is low, since a given individual would have several opportunities for reproduction over an extended series of annual cycles.

The gestation periods for both species are comparable to those determined for the spiny tenrecs of the subfamily Tenrecinae (6). Development of the young appears to proceed somewhat more slowly than in the other genera for which we have data.