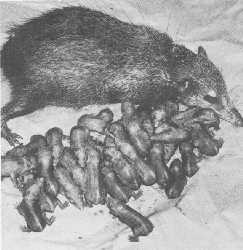 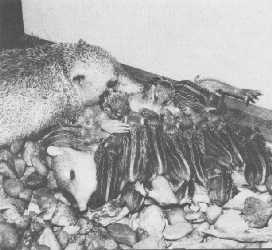 Left: Female Tailless tenrec Tenrec ecaudatus with ther newborn litter of 31 at Wassenaar Zoo; 30 survived to maturity.
Right: A smaller litter of 18 at four weeks. The female lies on her back, presenting 24 nipples for suckling.

We have been successful for nearly 20 years in exhibiting and breeding tropical birds in our large 'Louise Hal' greenhouse. Three years ago we decided to exhibit reptiles and small mammals in a similar fashion. We built a new greenhouse and installed a warm rain shower, special underfloor heating, as well as air conditioning to drop the temperature at night. When the tropical plants nearly outgrew the building, we called it the 'Junglehouse'.

In one of the small mammal enclosures, measuring 2 x 1.5 m, we placed a pair of Tailless tenrecs Tenrec ecaudatus which we had received from Madagascar on 11 March and 15 August 1970. The glass-fronted enclosure has a concrete floor covered with dry leaves. The tenrecs carry the leaves in their mouth using them as nesting material. They always defaecate in one corner covering their faeces with leaves. When alarmed or angry the tenrecs erect their thin mane of guard hairs, emitting shrill squeaks and sniffing loudly. Sometimes they will threaten by opening the mouth very wide, about 140°, but remain friendly towards their keeper on the whole.

Their diet consists mainly of minced meat, raw eggs, cottage cheese, mealworms, diced bananas and now and then day-old chicks or fish. A mixture of vitamins and minerals (Gistocal) is added to the meat. While eating they hold down their food with their forepaws and can drink quickly with their long tongues.

Although no signs of mating were observed, we suspected that the female was pregnant when her 24 nipples became swollen. A few days later, on 11 February 1971, she gave birth to 19 young, of which 18 were successfully reared. At the end of February 1972, we observed the male showing an increased interest in the female. On 1 March 1972, a few copulations were observed and 53 days later, on 22 April 1972, the female gave birth to 31 healthy young; a little more than we had anticipated! The other tenrecs were removed and only the father remained in the enclosure with the female and the offspring after birth. Unfortunately the birth was not observed. At the time of writing, their babies are one week old and all 30 (one died) are doing fine, like the previous litter last year.

The new-born young of both litters weighed 10-18 g and had a head to tail length of 6-8 cm. They were hairless, blind and had minute teeth at birth. They managed to crawl around very well and sometimes made soft noises. The mother always lay resting partly on her back when suckling her young.

On the third day, we observed the young ones repeatedly licking chewed or chopped food between the lips of their parents although the adults did not try to present it to them. The young also started to drink milk from a low plate provided for the mother. After four to six days their eyes opened and rows of strong white spines started to grow on their back, giving them an unshaven appearance. At only a week old they started to lick bananas and minced meat from the plate of their parents. We believe that precocial self-feeding was instrumental in our success with the offspring. After about four weeks the young ones had doubled their length and some had started to grow faster than others, although they never fought over their food. At the age of five weeks, weight varied between 150 and 300 g. After about six to seven weeks, the white spines were replaced by rows of long, thin, rigid hairs. When eight to ten weeks old, the young equalled their parents in size and colouring. Adult tenrecs exhibit individual differences in colouring. We hope that our 30 young tenrecs will not give us any problems during their development period.

In the meantime, 3 females, born in February 1971, gave birth in March 1972 to one or two offspring, but unfortunately all died within a day. However we were able to observe that in two of the females the young emerged tail first.

Product mentioned in the text:
Gistocal: manufactured by Brocaeds, Holland.